Sharia Law In the UK 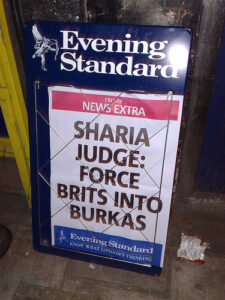 Next week, several NGOs are sponsoring a seminar in a committee room of the UK House of Commons regarding the supposed dangers of Sharia law in the UK. This is of interest to me for the same reason I’m sure it’s interesting to anyone interested in arbitration and private international law, and also because the bogeyman of Sharia law has political resonance on this side of the Atlantic too: Donald Trump and his surrogates have whipped up uninformed public opposition to Sharia law in the United States. According to a popular website, “Sharia law in the United States of America has reached penetration phase 3,” whatever that means. I’ve written about the American manifestations of anti-Sharia fervor before.

The sponsors of the London event have published accounts of women who say they have suffered at the hands of Sharia courts. I want to discuss one of the accounts to show why the issue of Sharia is much ado about nothing.

In the pseudonymous account, a Pakistani Muslim woman named Shagufta had immigrated to the UK with her late husband. They had a daughter, Lubna. Lubna was married, but she obtained a civil divorce from her husband. Representatives of their mosque then pressured Lubna and Shagufta to obtain a religious divorce before a Sharia court, in part by repeating false accusations the ex-husband had made against Shagufta and in part by pointing out that without a religious divorce Lubna could not remarry as a matter of Islamic law. Shagufta and Lubna reluctantly agreed. The experience of attending the court was upsetting in many ways, perhaps mostly because the court refused to grant the religious divorce and more or less instructed Lubna to reconcile with her ex-husband. Shagufta was ostracized from her religious community for her trouble.

This is of course an unhappy story, and while parts of it may be unique to Islam, the main gist is not. In lots of religious communities, a civil divorce does not give the divorced spouse the right to remarry within the religion. The two easiest examples are Judaism, where the husband is required to give a writ of divorce known as a get to the wife before she may remarry, and Roman Catholicism, which does not permit divorce at all but which has tribunals that can decide claims for annulment, i.e., that a true marriage never existed. Just like the sharia court in London, neither a bet din (Jewish religious court) nor a canonical tribunal has any compulsory jurisdiction over anyone, at least without the parties’ agreement to arbitrate. Just like the Jewish and Roman Catholic tribunals, the sharia court could only rule on the wife’s status under Islamic law, not under the civil law. She was absolutely free to remarry as a matter of civil law, and indeed, she did remarry (a non-Muslim). Surely no one thinks that a civil court should be empowered to decide questions of religious doctrine.

I could see an issue in cases where the decision of a UK sharia court is given coercive effect in another country where sharia is the civil law. But that’s a problem with the law of the other country, not with the law of the UK. I could also see a distinction between, say, commercial disputes, where parties should be free to agree to arbitrate before religious tribunals just as they are before the AAA, and, say, child custody or other family law disputes, where the state does not permit binding arbitration. But these sorts of distinction aren’t really at issue in Shagufta’s case, since no one tried to give the sharia court’s decision binding effect in civil law.

So what, exactly, is the problem? Discussions of Sharia generally amount to nothing more than a lot of ill-informed fearmongering. Religious people should be free to use religious tribunals to decide religious disputes in a non-coercive way, and if they don’t like the tribunals their religion uses, they’re free to abandon them.