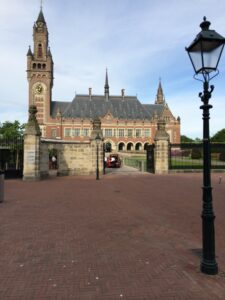 The Special Commission on the Practical Operation of the Hague Apostille Commission will be meeting at the Peace Palace beginning this week. Here are a few of the key documents:
END_OF_DOCUMENT_TOKEN_TO_BE_REPLACED

Continue ReadingApostille Convention: The Upcoming Meeting of the Special Commission

I have created a resource page for Water Splash v. Menon, the case about Article 10(a) of the Hague Service Convention that is now before the Supreme Court on a…

The case of the day is Doğan v. Barak (C.D. Cal. 2016). This is another case in the “Gaza flotilla lawfare” genre. I previously wrote about Schermerhorn v. Israel, where a motion to dismiss is yet to be decided. The Schermerhorn case is a FSIA case, because the defendant is Israel itself. In today’s case, the plaintiffs, Ahmet and Himet Doğan, both Turkish nationals, were the parents of Furkan Doğan, a US citizen who took part in the Gaza flotilla’s attempt to run the blockade of Gaza and who was killed in the fighting that occurred when the IDF boarded the flotilla vessels after they refused to turn back. They sued Ehud Barak, then Israel’s Minister of Defense, under the Alien Tort Statute, the Torture Victim Protection Act, and the Anti-Terrorism Act. Barak moved to dismiss, supported by the United States, which filed a suggestion of immunity.
END_OF_DOCUMENT_TOKEN_TO_BE_REPLACED

Back in July 2015, I covered Menon v. Water Splash, Inc., 472 S.W.3d 28 (Tex. Ct. App. 2015), a case in which the Texas Court of Appeals held, erroneously and over a strong dissent, that Article 10(a) of the Hague Service Convention does not permit service by mail, because it refers to “sending” rather than “serving” documents. In October 2015, the court denied a petition for rehearing en banc, and in May 2016 the Texas Supreme Court denied review. Water Splash, the plaintiff below, then filed a petition for a writ of certiorari in the U.S. Supreme Court. Such petitions, as a general matter, have a very low chance of success, and in many cases, as here, the respondent waives the right to respond. But in September, the Court requested a response, which generally is an indication that there may be some interest on the Court in the issue the petition presents. So it is possible that at long last we will have some closure one way or the other to the saga of Article 10(a) in the US courts. Stay tuned!
END_OF_DOCUMENT_TOKEN_TO_BE_REPLACED

I saw an ad recently for a company called Notarize, Inc. Here is the pitch:

Thanks to the commonwealth of Virginia, no matter where you live in the U.S., your documents can now be notarized online by a trusted notary.

Upload and annotate any document, verify your identity, and connect with an eNotary in minutes. All handled securely through the Notarize app. Once done, print or share your notarized document electronically.

Notarize from anywhere in the world with your device. All you need is a webcam, Valid ID, and your document.

END_OF_DOCUMENT_TOKEN_TO_BE_REPLACED

Continue ReadingEditorial: Notarize Is Not The Right Answer If you have not read Donald Trump’s speech from yesterday, you should. It’s the kind of speech that made the grandparents of us American Jews keep packed suitcases in the closet. It turns out the reason Mr. Trump is on the verge of an historic defeat is the international financiers and media elite who meet in secret with their candidate, Hillary Clinton, to plot the destruction of American sovereignty so they can bleed the country dry. I’m going to reprint a long excerpt, but you really should read the whole thing:
END_OF_DOCUMENT_TOKEN_TO_BE_REPLACED

The case of the day is Selmani v. Glaxo Smith Kline (D.N.J. 2016). Alexandre Selmani sued Liam Kennedy and others, alleging he was fired in retaliation for whistleblowing. Kennedy, who lived in the UK, was served with process by a process server working on behalf of a solicitor. Kennedy moved to dismiss for insufficient service of process.
END_OF_DOCUMENT_TOKEN_TO_BE_REPLACED

The case of the day is Resorts World at Sentosa v. Chan (D. Hawai’i 2016). Michelle Mai Chan incurred a gambling debt at Resorts World Sentosa, a Singapore resort and casino. Resorts World sued her in the Singapore High Court and obtained a default judgment in the principal amount of S$1.16 million. Resorts World then sought recognition and enforcement in Hawai’i, and it moved for summary judgment.
END_OF_DOCUMENT_TOKEN_TO_BE_REPLACED

In a new post at Lawfare, John Bellinger notes that Congress is considering various proposals to “fix JASTA,” and he makes a pitch for his preferred proposal: an amendment giving the President the power to waive the new FSIA exception on a country-by-country basis, perhaps conditioning the power on the President’s periodic certification that the country in question remains a US ally and that it is taking action to fight terrorism and extremism. As Bellinger points out, as long as Congress is explicit about it, it could make this new waiver procedure retroactive, thus allowing the President to bar the actions against Saudi Arabia that have already been brought under the new statute.
END_OF_DOCUMENT_TOKEN_TO_BE_REPLACED

The case of the day is St. Francis Assisi v. Kuwait Finance House (N.D. Cal. 2016). St. Francis, a non-profit, sued Hajjaj al-Ajmi, alleging that he had financed ISIS, which was responsible for the murder of Assyrian Christians in Iraq and Syria. St. Francis moved for leave to serve process on al-Ajmi via Twitter.
END_OF_DOCUMENT_TOKEN_TO_BE_REPLACED