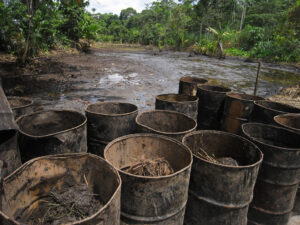 Back in March, I noted that Chevron had moved for partial summary judgment in the RICO case it had filed in New York against Donziger, Naranjo and others. In its motion, Chevron contended that the RICO defendants had set up the Ecuadoran judgment as claim- and issue-preclusive on the question whether the Ecuadoran proceedings were corrupt, because the Ecuadoran court had already ruled on that question. Chevron sought summary judgment on the issue whether the Ecuadoran judgment could have any preclusive effect. According to Chevron, the judgment could have no preclusive effect because it was the product of a corrupt proceeding and Chevron had not had a fair opportunity to litigate the claim and the issues in Ecuador.

The motion is fully briefed. I have to say I think the Ecuadorans and Donziger got their hats handed to them. Here’s why.

In their answer, the Ecuadorans pleaded the following affirmative defense:

The claims asserted in the Complaint and any relief sought thereunder are barred, in whole or in part, under the doctrines of res judicata and/or collateral estoppel.

Donziger pleaded the same defense. Chevron then filed a motion for partial summary judgment directed to those affirmative defenses and giving the now-familiar litany of reasons for concluding that the Ecuadoran proceedings were fraudulent.

At first, it seemed that Donziger and the Ecuadorans were going to marshal their evidence and put it before the court to get a ruling that Chevron’s evidence of fraud and corruption was not undisputed. In their first request for a two-week extension of time to respond to the motion,2 they wrote:

The extension of time would not come close to giving the defendants an amount of time to prepare their response equal to that Chevron enjoyed to prepare its Motion, but would at least given them an opportunity to organize some response to the legal arguments and thousands of pages of exhibits and some contradicting evidence and/or a request pursuant to Rule 56(d) for the opportunity to take necessary discovery to contradict Chevron’s claimed evidentiary bases for the motion.

But my hopes for a showdown on the evidence were dashed when the RICO defendants filed their opposition to the motion for partial summary judgment. Instead of controverting any of the evidence Chevron had offered, the RICO defendants argued that they had made it abundantly clear that they were not asking the court to give the Ecudaoran judgment any claim- or issue-preclusive effect:

Defendants’ general invocation of the res judicata or collateral estoppel defenses does not refer to the Ecuadorian Judgment or indeed any other of the many judgments and rulings between these parties. Given the breadth of litigation concerning Chevron’s decades-long contamination of the Ecuadorian Amazon, there are a host of judicial decisions and findings that potentially have collateral estoppel and res judicata effect as defenses to claims Chevron may make in this lawsuit, including but not limited to prior rulings by the U.S. Court of Appeals for the Second Circuit and/or other U.S. federal district and appellate courts in related proceedings under 28 U.S.C. § 1782.

What other judgment could they have been talking about? Chevron pounced on precisely this issue, noting that the RICO defendants had failed to identify any. More to the point, another group of RICO defendants, the Stratus defendants, did plead the preclusive effect of the Ecuadoran judgment with some particularity:

Chevron’s claims against the Stratus Defendants are barred, in whole or in part, by this Court’s obligation to afford deference to, international comity to and/or to presume the regularity of the judicial proceedings and validity of the judgment and reasons therefore (sic) as entered by the Courts in Ecuador, including, but not limited to, the Ecuadorian trial court’s statement that it did not rely on the Cabrera report in issuing the Judgment, and the Ecuadorian Appellate Court’s finding that the trial court’s Judgment was not tainted by fraud. To the extent the Court affords comity to the Ecuadorian courts’ decisions and findings, Chevron’s claims are barred, in whole or in part, by the doctrine of collateral estoppel.

Chevron took the opportunity to make another motion for partial summary judgment, this one aimed at Stratus rather than at Donziger and the Ecuadorans, noting, “The Stratus Defendants unequivocally plead that the Ecuadorian judgment precludes Chevron’s claims.”

So now Donziger and the Ecuadorans find themselves in a difficult situation of their own making. If the judge does not accept their argument about mootness, then the facts Chevron has offered stand undisputed. A judge could find that even assuming the truth of those facts Chevron is not entitled to judgment as a matter of law on the effect of the Ecuadoran judgment,3 but can the RICO defendants count on Judge Kaplan to take that view, given his prior rulings? Perhaps Donziger and the Ecuadorans can cooperate with Stratus to prepare a substantive factual defense to the motion and either take their chances that Judge Kaplan will not rule on the first summary judgment motion before the Stratus motion is fully briefed or else ask the judge to delay ruling on the first motion until the second motion is ready to be heard.