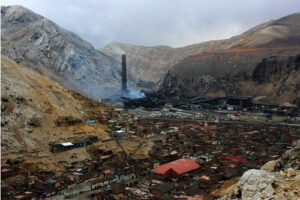 The case of the day, A.O.A. v. Doe Run Resources Corp. (E.D. Mo. 2011), is a little outside the official Letters Blogatory Scope of Coverage, but I cover it because it concerns two of our recurring themes: aggressive use of the FAA’s statute permitting removal of New York Convention cases, and Latin American toxic torts such as the Lago Agrio case in Ecuador or the banana pesticide case in Nicaragua.

For nearly a century, La Oroya, Peru has been home to smelters and refineries that produce copper, lead, zinc, and other metals from ores mined in the Andes Mountains. In 1974, the government of Peru nationalized the facility and transferred it to a Peruvian state-owned firm, Centromin. In the 1990s, Centromin determined that the refineries had caused significant pollution, including lead contamination in the soil, and Peru enacted a law known as the Programa de Adecación y Manejo Ambiental, which required Centromin to do a bunch of environmental remediation by 2007.

Meanwhile, in 1997, American investors including the Renco Group purchased shares in the enterprise from Centromin. As part of the deal, Centromin indemnified Renco and the other purchasers from third-party claims arising from toxic emissions before the date of the sale, and Peru guaranteed Centromin’s obligation. Renco and the other investors, in turn, agreed to perform some clean-up work and to be responsible to third parties for damage that they themselves caused.

In 2008, several Peruvian children sued Renco and others (Doe Run Resources Corp, D.R. Acquisition Corp., Renco Holdings, and several of their executives—Marvin Kaiser, Albert Bruce Neil, Jeffrey Zelms, Theodore Fox, Daniel Vornberg, and Ira Rennert) in the Circuit Court for the City of St. Louis, Missouri. The defendants removed the case, but it was remanded. Back in the state court, the defendants tried to get Peru to defend them against the plaintiffs’ claims, and they asserted that Peru had not completed the promised environmental clean-up. Peru refused to enter the case, and Renco notified Peru of its intent to arbitrate under the US/Peru Trade Promotion Agreement.

After the arbitration commenced, Renco again removed the underlying case from the Missouri state court to the US District Court for the Eastern District of Missouri. The plaintiffs unsuccessfully challenged the removal. Renco then moved to stay the case pending the outcome of the arbitration.

Section 3 of the FAA requires the court to stay an action if the action involves issues “referable to arbitration under [ellipsis] an agreement.” This is a narrower test than the test for removal, which asks only whether the claims “relate to” the arbitration. Renco and the others argued that the arbitration would decide whether Peru or the defendants ultimately should be liable for defending the US action and potentially paying the plaintiffs, but the judge accepted the plaintiff’s argument that the arbitration was really about arbitration, and that the issue of indemnification was an issue between Renco and Peru, not between the plaintiffs and Renco. Nor did the judge accept that there was a sufficient relationship between the US lawsuit and the arbitration to make a discretionary stay sensible. The factors, under Eighth Circuit precedent, are (1) the risk of inconsistent outcomes; (2) whether the parties will be bound by the arbitrator’s decision; and (3) prejudice resulting from delay. The judge found little risk of inconsistent rulings, found that the plaintiffs would not be bound by the arbitrator’s decision, and found that the plaintiffs would be prejudiced b a further delay, as their case had already been delayed for years and no court had yet reached the merits.