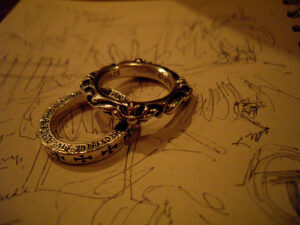 The case of the day, Guessous v. Chrome Hearts, LLC (Cal. Ct. App. 2011), is another example of a party seeking recognition of a foreign judgment for defensive rather than offensive purposes, i.e., in order to defend against a claim in a US court on grounds of res judicata.

In the mid-1990s, Chrome Hearts sued Mohammed Amal Guessous in the Central District of California for ripping off its jewelry designs. The case settled, and as part of the settlement, Chrome Hearts entered into a covenant not to sue, that on its face was pretty broad:

Chrome Hearts covenants and agrees that it will not sue Guessous for trademark infringement, trade dress infringement, unfair competition, or similar or related claims whose gravamen is alleged consumer confusion or buyer confusion or potential confusion, including any claim based on the alleged similarity between the overall look and feel of Chrome Hearts’ products and products designed, manufactured, or sold by Guessous. [¶] This covenant applies worldwide, from the date of the Settlement Agreement to the end of time, not only to the existing lines of clothing and jewelry manufactured and sold by Guessous and Chrome Hearts, but also to future products not yet designed, manufactured, and/or sold. Provided, however, this covenant not to sue does not apply to claims by Chrome Hearts against Guessous alleging that Guessous has used the “CHROME HEARTS” mark.

In 2007, Chrome Hearts sued Guessous again, this time in Paris, alleging that Guessous had infringed its “Banner”, “Horseshoe”, and “Dagger” marks. Each of those marks contains the words “Chrome Hearts”. Guessous defended on the grounds that the covenant not to sue barred the case, but the Court of Appeals, affirming a temporary injunction against Guessous, held that the covenant not to sue was “limited to those marks constituted by a product, and that by expressly excluding from its scope claims by CHROME HEARTS against Guessous alleging that Guessous has used the ‘CHROME HEARTS’ mark, this covenant does not extend to verbal and semi-figurative marks belonging to this company.”

Before the French judgment became final, Guessous sued Chrome Hearts in Los Angeles County Superior Court for breach of the covenant not to sue. But before the court ruled on the merits, the French proceeding went to a final judgment, and Chrome Hearts counterclaimed for recognition and enforcement of the French judgment (the issue of enforcement related to the damages the French court awarded, but enforcement of the damages award was not at issue in today’s case of the day). Chrome Hearts also sought judgment on the pleadings on Guesseous’s claims of breach of contract, on the grounds that the French decision had preclusive effect. The Superior Court agreed that Guessous’s claim was barred by res judicata.

On appeal, the court reviewed the basic doctrine of res judicata and noted that “a judgment from a foreign court may act as a bar under the doctrine of res judicata.” Guessous argued that the French judgment was not entitled to recognition because he had not received a fair trial in France. In particular, he noted that under California law, parol evidence should have been admitted by the French court to aid in its construction of the covenant not to sue. But the court rejected the argument on the grounds that the French court had expressly found the covenant not to sue to be unambiguous, and that in any case, Guessous had failed to identify any ambiguity or to point to any particular item of parol evidence that he would have offered to the French court had he been permitted to do so.