Case of the Day: Bank of Mongolia v. Taskin 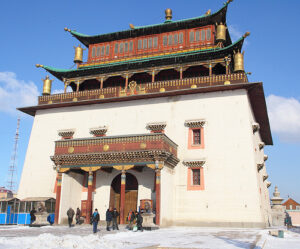 H/T to Antonin Pribetic of the Trial Warrior Blog for the reference to the case of the day, Bank of Mongolia v. Taskin (Ontario Super. Ct. 2011). The Bank of Mongolia sued Senol Taskin and several others in the Southern District of Florida. Taskin, according to the complaint, was the senior vice president of M&P Global Financial Services, Inc. and M&P Global Financial Services Europe, AG, and a director of GT International Holdings, Inc. All of these entities were also defendants in the Florida case. The claim was that Taskin and the other defendants told the Bank, which was trying to obtain $1 billion in financing for an affordable housing project in Mongolia, that they could raise the money if the Bank issued $200 million in documentary letters of credit to the defendants. The Bank claimed that the defendants represented that the deal was risk-free for the bank, because they would never draw on the letters of credit. The Bank also claimed that the defendants represented that they could earn a 200%-400% return for the Bank. Now, it seems to me that there are serious problems with any case in which a central bank alleges that it relied on representations of a 200%-400% risk-free return, but that’s a question for another post! The long and short of it was that the Bank asserted that it had been bilked and sued Taskin and the others for civil violations of the RICO statute, fraud, breach of contract, conversion, unjust enrichment, and a cause of action under Florida law called “civil theft”.

The Bank served Taskin with the summons and complaint by registered mail in Ontario. Taskin did not appear or defend, and the court ultimately entered a default judgment against him.

(There were two problems with the default judgment against Taskin. First, the judge issued a document titled “Final Judgment” that referred the case to the magistrate judge for a determination of the amount of damages. This way of proceeding can only cause confusion, since the time for appeal depends on the date of entry of the final judgment. The better procedure is to determine the amount of the damages and then enter the final judgment. Second, the docket is complex, but it appears to me that the claims against other defendants were still pending at the time of the final judgment against Taskin. Assuming that is true, and assuming that some of those still-active defendants were alleged to be jointly and severally liable with Taskin, the better practice would have been to wait for all the claims to be resolved and then to enter the judgment, under the rule of Frow v. De La Vega, 82 U.S. 552 (1872)).

In November 2010, after the entry of judgment against him, Taskin filed a declaration asserting, among other things, that he had never been served with process in accordance with Ontario law, and in particular, with Rule 16 of the Ontario Rules of Civil Procedure. The judge construed the declaration as a motion for relief from the judgment under Rule 60 of the Federal Rules of Civil Procedure. In January 2011, the judge denied the motion:

In September 2011 Taskin filed another motion for relief, this time properly captioned as a motion under Rule 60. The magistrate judge recommended that the motion be denied on the grounds that it was duplicative of the earlier motion, and the judge overruled Taskin’s objections and adopted the magistrate judge’s recommendations on November 16, 2011. The time to appeal has not yet expired.

It is my view that these decisions were correct as a matter of US law. Antonin and I had a dialogue on this very point back in July. In my view, because Canada has not formally objected to service by mail under Article 10 of the Convention, and because it is the law of the forum that determines the validity of the service, whether the service complied with the Ontario Rules of Civil Procedure is irrelevant. Antonin did not agree—his views are reflected in his comments in our dialogue.

Now the scene shifts to Canada. The Bank brought an action for recognition and enforcement of the judgment against Taskin. Taskin raised as a defense denial of natural justice, which I think is the rough equivalent of lack of due process of law in US terms. The judge rejected the defense, noting that there was no dispute that Taskin had had actual notice of the proceedings in plenty of time to defend:

Assuming that conflicts laws required service in conformity with Ontario’s Rules of Civil Procedure, R.R.O. 1990, Reg. 194, this procedural irregularity does not result in the proceedings being contrary to natural justice.

It seems to me that this is a dictum, and that the court is not holding that the service is improper.

The judge goes on to decide that enforcement of the judgment should be stayed pending the outcome of the Rule 60 motion in the Florida court. Antonin is in my view 100% correct to point out that a Rule 60 motion does not disturb the finality of the judgment, so it seems the Ontario judge was not required to stay enforcement on grounds of lack of finality (though I don’t think that means that he was forbidden to stay enforcement—but that is a question of Canadian law on which I’d defer to Antonin).

The case of the day is Topstone Communications, Inc. v. Chenyi Xu (S.D.