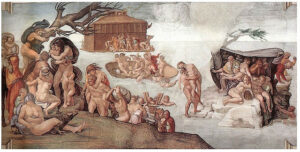 The case of the day is Simmons v. Sabine River Authority of Louisiana (W.D. La. 2011). Simmons sued Louisiana government agencies and Entergy Corp. and affiliates on behalf of a purported class of landowners near the Sabine River. The claim was that the defendants caused a catastrophic flood by opening the floodgates of the Toledo Bend Dam in March 2001. The flood, according to Simmons, lasted forty days.

Simmons originally brought the action in the Louisiana state courts. The Louisiana governmental defendants filed preemptory exceptions of no cause of action (which, I take it, are the Louisiana equivalents of motion to dismiss for failure to state a claim on which relief can be granted), and apparently in order to save the claim, Simmons filed an amended complaint asserting claims under the Fifth and Fourteenth Amendments to the US Constitution. The state court thereafter dismissed the defendants’ exceptions.

Many years passed (the case was filed in 2002, the state court dismissed the exceptions in 2002, and before you know it, it was 2011). Simmons filed another amended complaint, this one asserting claims against Northfield Insurance Company and AEGIS, two insurers that allegedly had written policies that insured some of the damages asserted in the action. The defendants then unanimously filed a notice of removal, removing the case to the federal court.

The judge correctly found that the removal was grossly untimely under the statute governing removal in ordinary federal question cases. Simmons first asserted the federal claims in 2002, and the defendants had 30 days to remove. But the AEGIS policy contained an arbitration agreement that required arbitration (in the United States) of controversies arising out of or relating to the policy. The defendants asserted that the claim against AEGIS came within the scope of the arbitration clause and therefore cited 9 U.S.C. § 205 as an alternative basis for removal. The statute provides:

Under Louisiana law, a statute allows an injured party to sue the wrongdoer’s insurer directly, and in such cases, the plaintiff can be bound by an arbitration clause in the insurance policy even though, of course, the plaintiff is not a party to the insurance company, and the judge found that under Louisiana law, the agreement bound the plaintiff. But the question remained whether the agreement fell under the New York Convention and whether the claim against AEGIS related to the policy, such that it fell within the scope of the arbitration agreement, as required by the statute for removal.

Did the Agreement Fall Under The Convention?

An arbitration agreement or arbitral award arising out of a legal relationship, whether contractual or not, which is considered as commercial, including a transaction, contract, or agreement described in section 2 of this title, falls under the Convention. An agreement or award arising out of such a relationship which is entirely between citizens of the United States shall be deemed not to fall under the Convention unless that relationship involves property located abroad, envisages performance or enforcement abroad, or has some other reasonable relation with one or more foreign states. For the purpose of this section a corporation is a citizen of the United States if it is incorporated or has its principal place of business in the United States.

Did the State Court Litigation Relate To The Arbitration Agreement?

The more difficult question was whether the state court case related to the arbitration agreement. “Related” is construed broadly. AEGIS’s best appellate precedent, Acosta v. Master Maintenance & Construction, 452 F.3d 373 (5th Cir. 2006), supported removal, but in Acosta, there was also a dispute about the insurance coverage between the insurer and the insured; there was no such dispute in AEGIS’s case. However, in an unpublished district court decision, Adams v. Oceaneering International (W.D. La. 2010), Judge Melançon permitted removal where the only dispute was between the injured plaintiff and the insurer, not the insurer and its insured, and on the strength of this precedent, Magistrate Judge Kay found that the claim related to the arbitration agreement.

One oddity about the case was that the judge did not stay the case to allow an arbitration to proceed. It’s unclear from the decision whether AETNA intended to move to compel arbitration. If the defendants simply used the FAA’s removal statute to get into federal court without any intention of arbitrating the AETNA claim, I wonder if this doesn’t point to a weakness in the statutory scheme. Once a defendant removes a case to federal court on New York Convention grounds, shouldn’t it be required to arbitrate the claim?