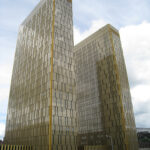 Conflict of Laws.net had a post on a recent decision of the European Court of Justice, Prism Investments BV v. van der Meer. The facts were as follows: A Finnish bank loaned money to Arilco Opportune, which in turn lent the money to its Netherlands subsidiary, Arilco Holland. Arilco Holland transferred the funds to Prism Investments, another Netherlands company. The Rechtbank van Koophandel te Brussel (the Commercial Court of Brussels) ordered Arilco Opportune to repay the Finnish bank. Arilco Opportune appealed to the Hof van Beroep te Brussels (the Court of Appeals in Brussels), and in the appeal, Arilco Holland sought an order seeking reimbursement from Prism. The appellate court granted the order for reimbursement.

Later, Ariclo Holland was declared insolvent, and van der Meer, the receiver, sought an order from a Netherlands court, the Rechtsbank ‘s-Hertogenbosch, declaring the Belgian judgment against Prism on reimbursement to be enforceable (i.e., seeking recognition of the judgment). The court issued the order, and Prism sought to have it annulled on the grounds that Prism and Arilco Holland had already settled the matter in Belgium (the receiver “challenged that financial settlement in detail”, which I think means that he denied that the matter had been settled in the way Prism claimed). The Rechtsbank rejected Prism’s arguments on the grounds that under Article 45 of Regulation 44/2001, the grounds for non-recognition of the Belgian judgment were limited and did not include settlement of the underlying judgment. One of the few exceptions is for judgments that are manifestly contrary to public policy, and in its appeal to the Hoge Raad, Prism argued that public policy could not countenance recognition of a judgment that the defendant had already satisfied. The Hoge Raad was uncertain whether satisfaction of the judgment could be a defense to recognition, or whether it could only be a defense to an actual enforcement proceeding, and so it referred the question to the ECJ.

The ECJ held that because satisfaction of the judgment was not one of the specified grounds for non-recognition in Regulation 44/2001, the Netherlands court had to recognize the judgment. However, enforcement is another question.

This approach is the same approach that a state court in the US will (or should, at any rate) apply, I think, in determining the effect that the Full Faith and Credit Clause requires it to give to the judgment of a sister state that had already been satisfied. Under § 116 of the Restatement (Second) of Conflict of Laws, “A judgment will not be enforced in other states if the judgment has been discharged by payment or otherwise under the local law of the state of rendition.” But that is not to say the judgment is not entitled to recognition:

The recognition to which a foreign judgment is entitled will not usually be affected by its payment or other discharge. Following its discharge, the judgment will usually continue to have the same res judicata effect in the state of rendition, both as to the parties and the issues involved, that it enjoyed theretofore. The judgment will be given the same res judicata effect in other states that it has in the state of rendition subject to the considerations stated in §§ 94-95. As between States of the United States, the giving of such res judicata effect is required by full faith and credit.

It’s interesting to watch European solutions to problems of federalism converge, at least in this instance, on US solutions!